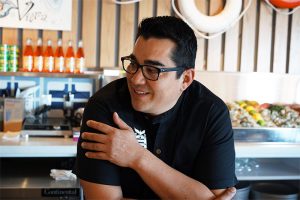 For this week’s Snack Time, we have tapas on the menu as we catch up with Chef Jose Garces whose Latin-inspired dishes you’ll crave time & again.

Since touching down in Philadelphia in 2000, Chef has made a name for himself nationally, winning a James Beard Award for Best Chef in the Mid-Atlantic Region in 2009, achieving Iron Chef status, and authoring two cookbooks, The Latin Road Home and Latin Evolution. Read on to learn what this acclaimed chef has been up to!

Where are you from & where do you live now? I was born and raised in Chicago, but now I live in the Manayunk section of Philadelphia. I’ve been in Philadelphia since November 2000.

Tell us about your first experience working in a restaurant. My first job in a restaurant environment was when I was 13! I worked at an Italian banquet hall for about three years – as a busser, a server and then finally, pantry. My first professional cooking job was at the Signature Room in Chicago on the 96th floor of the John Hancock building, working Garde Manger station for the first six months. It was right next to the fish station. There was this guy that worked right next to me who was just a phenomenal fish cook. He was able to flip two salmon filets at the same time. I wanted to have that same efficiency and economy of motion. I remember one time I tried the double flip, and they flipped, and I was so proud. However, my pride was tempered by the fact that I’d had too much oil in the pan, so when the filets landed, the oil in the pan splashed up onto my inner forearms, giving me one of my first memorable burns in the kitchen. When that cook left, I took over his station.

Best dish you’ve ever eaten (by another chef)? Globally: KyuBey Sushi in Tokyo was amazing. The rice—the texture, the flavors, the temperature of both the rice and the fish. It was sublime – a really nice piece of Nigiri is one of the best things in the world. Nationally: Sushi Irasawa in LA does a foie gras and wagyu broth that is mind blowing.

Have you picked up any new hobbies in quarantine? I started an urban garden on my roof! To be honest, I never envisioned it “working.” Planting a garden in four inches of soil on my roof?! But the zucchini came out great, the herbs are bountiful (ask me how much pesto I’ve made …), and I’m excited for the tomatoes to come in. It hasn’t all been a success though: the peppers are slow going and the cilantro yield is disappointing. I have to figure out the right time to clip them to keep growing.

What’s your favorite activity to do with your kids? You might laugh, but I play a lot of Fortnite with my son Andres. Yes, I’ve attempted to do the dances. No, you cannot see. When we’re not doing that, we enjoy going on hikes and biking together. We recently went on a socially distant road trip in an RV (so no hotels or interacting with strangers) to Chicago and Colorado to visit my father and brother. It was a great time! My daughter Olivia and I enjoy cooking together and just vegging out on the couch binging Netflix. I got her into Curb Your Enthusiasm and we recently started watching Somebody Feed Phil.

What advice do you have for aspiring chefs? I think the advice I give now is different than the advice I’d have given six or eight months ago; and the advice that I give next year will probably be different than it is now. Right now, I think it makes sense to focus on food delivery at home and bringing the restaurant quality experience into the home environment. Study food trends and be ready to pivot and be flexible.

Favorite snack that you can only find in Ecuador? Wow – this brought me back. It’s not a typical “Snack,” but there’s this volcanic mineral water called “Guitig”. It’s this sparkling mineral water that has such a unique taste I haven’t been able to find elsewhere. For a more traditional snack– Mote. It’s a bite from local street cart vendors made of warm steamed hominy with crispy roast pork, carrots, peas, cilantro and lime.

What’s the best unexpected flavor combo you’ve ever tried or invented? The chorizo, chocolate and shrimp dish from Tinto. Everyone doubted it, but it ended up being one of our number one sellers. It had cornmeal crusted shrimp, crispy chorizo and a warm, Espelette-spiced chocolate sauce.

What is one common misperception about running a restaurant? I think by now, most people realize that running a restaurant is hard work and much less glamorous than some think. It’s not just about the fun culinary stuff, like putting together menus together or coming up with new concepts. There are entire departments of stuff that need to be done for the business to succeed: marketing, cost management, dealing with the business side of it. One of the harder things to realize is that you can’t fall in love with a dish on a menu. If it’s not working, it can’t stay.

Given the choice, are you going with a sweet or spicy dish? Lately, I’ve been really into gochujang and sriaracha and other Asian chile sauces. I’ve also been using a lot of Peruvian chile pastes, like aji Amarillo, rocoto and panca. I love working with various types of spice in my food. In order to really know how to work these flavors, it requires a lot of skill and understanding of both their heat, flavors, and sweetness. The ability to incorporate spicy elements without being overwhelming is important, and that’s where I try to tie in my use of sweet. A touch of agave or honey or molasses to balance out foods that might be too acidic or spicy.

We heard your drink of choice is tequila … what’s your go-to tequila-based cocktail? It’s not quite a cocktail, but lately I’ve been frothing some pineapple juice in a blender and adding Don Julio reposado over ice. I toss a few fresh jalapeno rings to the glass and stir! It’s refreshing, sweet and a little spicy. Just the way I like it.

Who is your celebrity idol when you were a kid? Michael Jordan was my idol growing up – I was a kid in Chicago! Who’s your celebrity idol now? As an adult, I think I’m past the place of having heroes in the same way that I did as a child, but I have such a deep and abiding respect for Chef Jose Andres; both his incredible cooking and his selflessness and amazing work he does with World Kitchen.

If you weren’t making delicious Latin-inspired food, what would you be doing? Hmmm … I’d probably be living in a coastal town, just living a quiet life of fishing, boating and enjoying marine life. Maybe I’d open an Ecuadorian Restaurant. So, barring that, it would be great to open up a small B&B with a restaurant component and focus on world cuisine using local, seasonal foods.

What accomplishment are you most proud of? The way I’ve been able to raise my kids. We’re not done, and they’re still growing and changing, but I am incredibly proud of the young adults they’re turning into.

Happy (Half) Birthday to Us: A Taste of What We’ve Been Up To LEARN MORE
Trust the Process: Our Recipe for Success LEARN MORE

Let us fix you a snack. Sign up to be among the first to receive a taste of Snack PR.